Carnival Of Flesh - Stories From A Fallen World (CD Review) 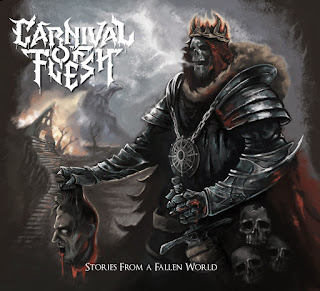 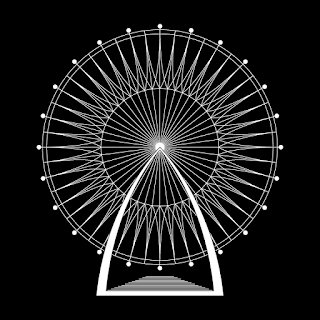 The story of Carnival of Flesh starts in late 2002, when two guys, Dachaz and Dam, wanted to reshape the Serbian black metal scene with a sound that escapes the traditional black Metal boundaries. This sound was commonly described as a refreshing mix of heavier guitars and more mind-blowing symphonies than usual.

Many of the local media outlets recognised the potential in this sound and insisted on reviewing rehearsal materials as demos, to which the creative duo strongly opposed, since the sound was not yet what they had envisioned.

As expected, such an insane combination was not easily executed and the band suffered from frequent personnel changes over the years, until officially splitting up in 2008.

In 2014., after a long hiatus, Dachaz decided to reboot Carnival of Flesh as a studio project. Over the course of the year, the perfect conditions were created for recording: Some of the best songs from the past were hand-picked from the vault, their arrangements were updated, lyrics conceptually rewritten and some of the best personnel was engaged. Guitars and bass were performed by the infamous Jake O’Bayne, while the drums were executed by one and only Vojin Ratkovic. The album was meticulously recorded, mixed and produced by internationally acclaimed Ivan Ilic Cili. Thus, “Stories From a Fallen World” were born. 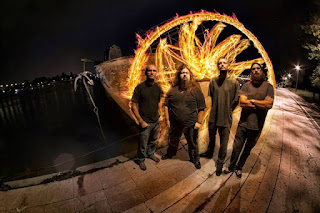 Lets begin with 'The Beginning' and to start with its sounds pretty much what you would expect from symphonic black metal, fast drums, great keyboard work, dark vocals and riffs a plenty, all you need is some epic backing vocals and sure enough half way through here they come.

'The Promise' does more of the same but 'The Horror' has a little bit more to offer, from the great intro bass work to the pounding drum pedals and chorus keyboard, this one then explodes into a more melodic and structured song, some great timing changes and a nice devil vocal effect.

'The Pact' has all of the previous elements, but added quiet bits with some acoustic instrumentation and then some very Dani Filth style vocals over great keyboard work.

Up next is a 10 minute monster called 'The Battle', love the use of a simple guitar riff picking out a few chords over the power backing.
As you would expect from a piece this long, there are plenty of breakdowns and timing changes, throwing in various new keyboard sounds and voacl styles.
Goes very quiet at one point and this awesome little bass line is played out with some demonic vocals and dark chorus backing.

Surprisngly the last track 'The Regret' is quiet mainstream, almost commercial sounding with a great riff running throughout.