01.Chiaroscuro
02.Next Stop Universe B
03.The Ghost Of Valentine
04.The Deep Dark Waters
05.Molasses 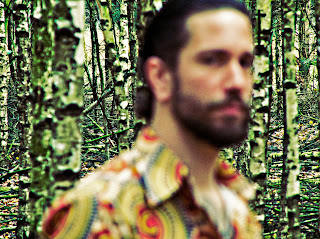 Since the demise of The Devil's Blood, Selim Lemouchi, has been on a journey of musical and self discovery; the results of which have been poured into this five track album. Unrestricted by traditional band or song structures, Earth Air Spirit Fire Water is a genre-defying creation.

Earth Air Spirit Fire Water was brought into being  with four drummers, a handful of guitar players, a few synthesizer players, several vocalists, a great cover-artist and many, many hours that were filled with laughter, tears, anger and spiritual communion.

The Devil's Blood were a band steeped in late 60's early 70's occult psych/rock, clearly since parting Selim has taken a different approach, from the opening of the first track we get treated to a sermon delivered with venom then the song starts and actually has quite a psychedelic feel, not unlike old style Hawkwind.In fact this style remains for the second song as well.

When 'The Ghost Of Valentine' hits the speakers we get more of what i expected, a simple ambient piece of electronica, beautiful synth playing with long sweeping notes running throughout.

The ghost of early Pink Floyd can be heard in 'The Deep Dark Waters' with some Bauhaus thrown in for good measure and it all ends with some great guitar work.