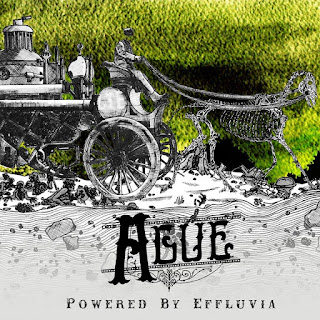 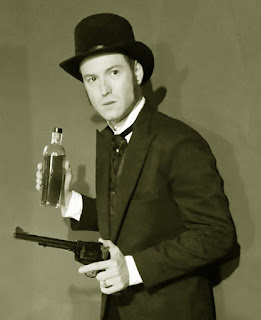 Steampunk, Victorian Goth (Dreadpunk), there are many possible genres that could be named for this American one man band formed in December 1884, though i suspect that 2014 may be a closer date.
Multi instrumentalist Half-Rats explains: "Plain speaking...I'll say that my music is not about impressing the wrong quantity, it's about vexing the right one. Fulfilling all of the duties of my given office...such things as being the living conduit and messenger for a dead world, guarding the affects of the deceased and establishing a bastion in this time - availing myself of all resources provided here to awaken the masses; reconciling past and present to set into locomotion a vehicle to a better future."

He has created a clever "back Story" a shortened version:

In post-civil war Detroit; a man, an act existed, compounded of a singular deviancy of character and incongruity of thought in relation to the mode of its day. My presence here is owed to an unnatural power, an ancient and terrible force of primordial origin - held by ethereal beings known to me simply as the "Hellbourne". Prior to the discovery of this queer source of power, I lived, and it can be fervently argued, on the periphery of polite society - A rogueish Heir with friends of questionable moral character - both rubbing shoulders with and coming to blows with casuals, publicans and the insane...My music and lyrics treated the problems of the day, and in no sense was I welcomed even in the bawdiest of establishments - The act was certainly considered odious in the newly-reformed vaudeville shows - not due to tawdry seduction, but to the brash truth! Still, I stayed the course. If you have made the assumption that the singular event that changed my already calamitous lifestyle afforded me no opportunity for salvation - you would be correct.

Corrupt police, disease, finding myself accidentally transported to the year 1916, frictions with socio-political movements, supernatural forces, bar brawls, pistols, the malcontent back-alley butcher, mad professors, reanimated super-soldiers...It was all there for me to contend with. 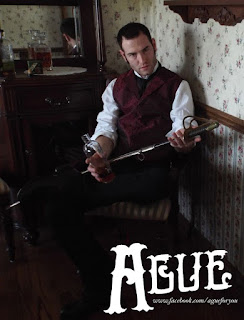 A touch of swing meets classic americana and 'Risus Sardonicus' launches us into the complex and (as yet) unkown world of Ague. This light near acoustic opener is then followed by a much darker piece: 'Fifty Drachms (To Kill A Man)'. A great vocal performance that is not a million miles away from Rufus Wainwright or Danny Elfman, excellent guitar playing and some nice keyboard work in the mix as well.

With its carnival keyboards 'Apoplexy In Summer (Industrial Accidents)' is a happy sounding song with some great backing harmony vocals, yet somehow its a disturbing piece, reminiscent at times of the Stranglers 'waltzinblack'.

'Parker's Expedition' has this wonderful old fashioned feel to it, another stunning vocal performance, this one has more than a touch of the cabaret about it.

Cannot go wrong with some harpsicord and 'Ubersoldat (Gbe Age)' has a great intro by said instrument and it is present throughout the strange mix of drums and more harmonic backing vocals.

'Fifteen Leagues To Providence' takes us back to early 1950's jazz and rock n roll with its solid guitarwork and hand clapping style backing music. This has a dark, almost, New Orleans "night tripper" vibe!

The intro this eight minute epic 'In Contempt Of Quinsy And Dropsy' is spoken by Steampunk author Steven C Davis over a quiet keyboard backing, telling us the tale of Dr.Parker and the effergies of the songs title.
The music then takes over and treats us to an almost symphonic rock song, good use of keyboard orchestration, driving drum patterns and another solid vocal performance.

Up next is the surprising 'Posing As Babalon', i say that because it has some pretty heavy guitarwork and a dark gothic undertone. The ghost of proto-doom metal lurks here, added to the driving drums and guitar playing is a great old sound "farfisa" keyboard sound.

Once again 'Hand Of Cinder, Hand Of Ash' offers us some more in the way of heavier music, this is another well orchestrated piece with some punchy powerchords coming through, all this creates a dark gothic rock monster which at one point includes some pure demonic vocals that would not be out of place on a cradle of filth album!
Yet somehow this song manages to mix in some 1950's guitar riffs and have an operatic edge as well.

I wonder where this final track will go? Well 'Chapel Perilous' returns us to that jazz/swing sound, a perfect way to end a very clever album full of different styles and superb sound production.