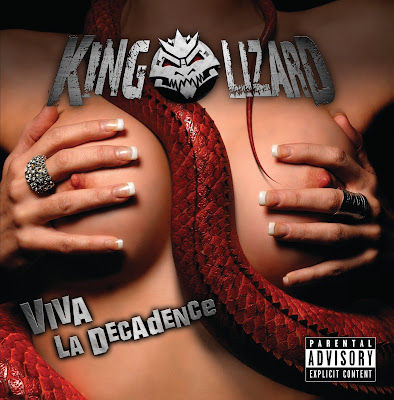 Guests:
Andy Brook (Intro to 'Never Be Mine')


London's own "Monsters Of Rock" first appeared way back in 2002 playing gigs and releasing a couple of demos, but it wasnt until 2006 that the band really began to get noticed with a solid line up that gigged everywhere and produced the 'Late Nite Dynamite' EP in 2007.

Finally their debut album has arrived with songs produced by both Andy Brook (Shush/Catfight) and Chris Tsangarides (Thin Lizzy/Judas Priest).


The title track 'Viva La Decadence' is inspired by the club 'Decadence' in London's SoHo, considered by many to be the spiritual home of all things Glam N Sleaze.
Riff heavy and full of high pitched screaming vocals, great backing vocals, rhythmic drumming and thumping bass, dare i say a perfect introduction to both band and album.


Angry as hell with a cool Crue vibe comes the ultimiate in "Fuck You" songs, 'Rain On You', when Flash sings "No matter what you do, im gonna rain on you" you get the feeling he means it!

'Rock N' Roll Me' with its dirty bass line transcribes from live to studio perfectly, intresting use of dual vocal to add a slight touch of menace and some epic solo work from Niro.

'Hell Yeah' really delivers that sleaze sound, and a very catchy chorus that you cant help singing along to and more face-ripping guitar solo's."You're going straight back to hell.......Yeah!".

'Kan't Kill Rock N' Roll' seems slightly slower than its live counterpart, have to say this ones not one of my favourites and despite the great solo and overall performance the song doesnt quite fire on all cylinders.

But then comes 'Never Be Mine', this is truly outstanding, a slow, dark n sleazy number that has a few timing changes a brilliant breakdown with melancolic vocals that builds into a creshendo that axl would kill for (espeially these days!).

"Just a picture packed away like a broken toy" is the opening line sung over some great acoustic guitar from producer Andy Brook, this is no ordinary rock ballad, in fact i will go as far as to say that 'Not For Me' is possibley the greatest example of said genre.
Flash's vocals are perfect, emotional yet strong, the drum pattern holds everything together helped by precision bass playing and breathtaking guitar solo's.
A song destined to be the 'Dream On' for its generation.

A seemingly out of place piano intro to 'Riot' just works so well that you almost forget that the cool bass line is about to herald the noise fest that always sends the audiences crazy every time.
There is a hint of Alice Coopers "Im Eighteen" running through this, but it is pure King Lizard that blows a big hole in the speakers!
Love the hint of piano later in the song as well and the police sirens is a nice touch at the end.

A fast paced Glam/Metal hybrid 'Taste The Hate' is a furious rocker as is the awesome 'Outrageous'.

The definitive King Lizard song 'Late Nite Dynamite' explodes on disc just as it does when performed live, it ticks every box required for perfect rock n roll entertainment.