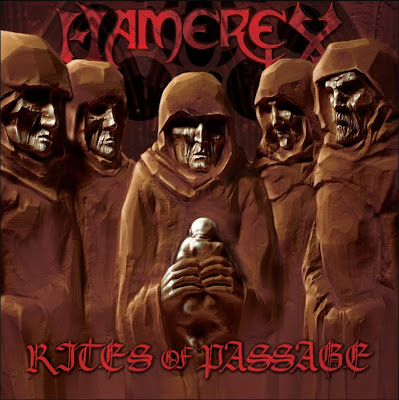 Hamerex are a Yorkshire based Heavy Metal band formed in August 2004.An energetic and entertaining live band put together by Steve drawing on the early 80's scene but taking in a wider variety of influences.
Soon to follow was Chris Moules who applied for the role of vocalist with the band and
proving the best choice in the selection. After numerous changes from the original line-
up, Andy Firth joined the band on bass and added a darker edge to the music.
Soon after came veteran drummer Darren Kelsall and brought with him the pace and timing needed for a solid metal band.
In April 2009 the bands first E.P. 'Into War'was released. As this was nearing completion
Joe Wilson stepped into the recording studio on guitar completing the current line up.Soon after they signed to Swerve Records and the following May put out their second E.P.
'The Lycan', which gained them many positive reviews.
Last August they began work on their first album “Rites Of Passage” at Planet Platforms
where the drums and Steve’s guitars were recorded and from February 2011 the rest was
completed at Dee Dee Music including mixing and mastering which was done by guitarist Joe
Wilson and bassist Andy Firth.
The album is released on Monday 26th September 2011 on iTunes and on CD through the
band’s store. The album features 10 tracks that have been written at various times
through the bands 7 year history. The album artwork was sculptured and illustrated by
James Mullett who also did the previous two E.P. covers for the band.
'Aftershocks Of Death' has a great intro very reminiscent of Diamond Head's 'Am I Evil', some solid drumming kicks this opening track along at a nice pace and some pretty awesome riffing going on there too.
Wonderous old school thrash rhythms punctuate 'The Headless Horseman', i have also got used to the Roddy Stone style vocals in fact this could be a Viking Skull song!!!!
'Stalker' kicks off with some nice bass work before launching into a doom paced rocker with the riffs coming at you at such a rate you cant sit still for a second.
'Hypnotise' pounds like a battering ram (Judas Priest pun intended), classic british heavy metal nuff said!
Now 'The Lycan' is a fucking great song, but the vocal is a little strained at times, sounds like the singer is trying to sing too high and it does kill it a bit.
An epic 8 minutes of superb music starting with some great acoustic guitar then heading off into pounding riffage and gutteral vocals.At times 'Rites Of Passage' threatens to move well and truly into doom territory but it keeps a thrash edge, making for a good well balanced mix.
'Army Of Darkness' is a dark brooding song, but again i think the vocal is slightly off, though i think thats because they have put on some kind of vocal fx.
I have to say as soon as i hit play on 'To The End' i got Hatebreeds 'I Will Be Heard' in my head, this is quite a hardcore/metalcore song, good but seems slightly out of place with the rest of the tracks.

'The Gates Of Hades' has some more great riffing in it, and all in all gets the album back on track.
Finally we have 'Waste Away' yet another great song, mid paced well mixed (The drum pedal work comes through a treat!) awesome guitarwork, but again i feel some work needed on the vocals.
All in all this is one helluva album and proof that the best metal still comes from this side of the Atlantic, my only drawback is some of the vocals.
Rating : 9/10
For fans Of : Viking Skull, Judas Priest, Iron Maiden, Evile
STU
Hamerex Heavy Metal

Popular posts from this blog 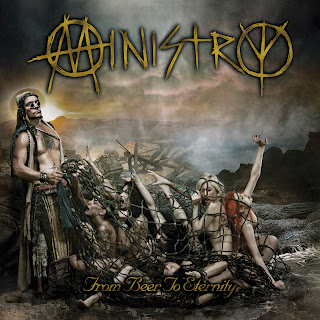 01.Hail To His Majesty (Peasants) 02.Punch In The Face 03.PermaWar 04.Perfect Storm 05.Fairly Unbalanced 06.The Horror 07.Side Fx Include Mikey's Middle Finger (TV 4) 08.Lesson Unlearned 09.Thanx But No Thanx 10.Change Of Luck 11.Enjoy The Quiet No one wrestles victory out of the clenched jaws of defeat quite like Ministry leader Al Jourgensen. Heading into the studio to produce Ministry’s 13th official studio album, From Beer to Eternity, he and all the members of his team were beside themselves grieving the sudden and unexpected death of their longtime guitarist Mike Scaccia on December 22nd, 2013. Last December, Scaccia worked with Jourgensen, guitarist Sin Quirin, drummer Aaron Rossi and bassist Tony Campos on a full batch of new Ministry songs. They finished the rough tracks on December 19th, 2012. Three days later Scaccia died from a heart attack he suffered onstage while playing a live show in Dallas, TX with his other band Rigor Mortis to celebrate their
Read more

Here is a list of 781 albums, singles, cassette tapes and compact discs. The idea was to create a list mixing the weird and wonderful world of Experimental and Electronic Music, Avant Garde Jazz and Harsh Noise, together with mainstream genres such as Progressive Rock, Doom Metal and Psychedelia. But I wanted to attempt to avoid the usual traps of such a list with endless amounts of classic rock that normally populates these kinds of “rare records” books and magazines. Of course any list written by one person is going to be subjective and mine is no exception, though I hope that my broad range of musical tastes offers a slightly unique quality to my work. It is what it is… 1. 13th Floor Elevators – The Psychedelic Sounds Of The 13th Floor Elevators (1966. International Artists IA LP 1) LP. 2. A Handful Of Dust ‎– Three Dances In Honour Of Sabbatai Sevi, The Apostate Messiah (1994. Corpus Hermeticum Hermes 006) 7” Single. 3. Aborym – With No Human Intervention (200
Read more

BLOOD ISLAND RAIDERS FIREBRAND SUPER ROCK WITCHSORROW SERPENT VENOM The Gaff, Holloway Road 02.10.09 SERPENT VENOM This is Paul from BIR other band and from the black sabbath vol 4 t-shirts he and the vocalist were wearing it was pretty obvious what we were going to get musically.But wow this was way beyond what i was expecting, sure the sabbath riffs were there and the vocalist was a remarkable mixture of early ozzy and paul rodgers, but it was a modern doom sound overall and very well executed, very powerful and it went down a storm! WITCHSORROW The Hampshire trio make such a big sound you'd think motorhead were on stage jamming with Cathedral! It is an awesome set of precision doom laden heavy metal with pounding bass lines, agressive drumming and breathtaking riffage with some pretty cool vocals as well.We are still waiting for an album, but i am told that recordings are now being done!!!!It also turns out that the band played their first gig at this venue 3 years ago when i
Read more