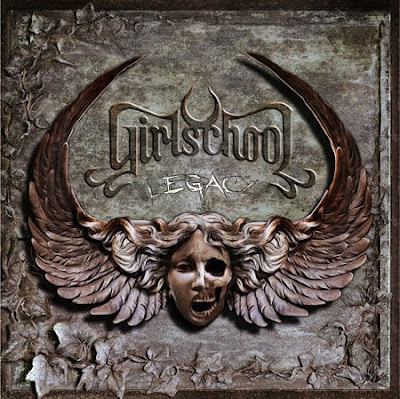 1.Everythings The Same
2.From The Other Side
3.I Spy
4.Spend Spend Spend
5.Whole New World
6.Just Another Day
7.Legend
8.Still Waters
9.Metropolis
10.Dont Mess Around
11.Zeitgeist
12.Dont Talk To Me
13.I Spy
14.Emergency
15.London

Kim McAuliffe - Vocals/Guitar
Jackie Chambers - Guitar
Enid Williams - Bass/Vocals
Denise Dufort - Drums
Special Guests :
J.J.French & Eddie Ojeda (Twisted Sister)
Tony Iommi (Black Sabbath/Heaven & Hell)
Ronnie James Dio (Rainbow/Black Sabbath/Heaven & Hell)
Fast Eddie Clarke (Motorhead/Fastway)
Lemmy & Phil Campbell (Motorhead)
Neil Murray (Whitesnake/Black Sabbath/Fastway)
What better way is there to celebrate 30 years in the buisness and honour the passing of former guitarist kelly Johnson than to produce your best album in nearly 20 years !Sure girlschool have always produced a high standard of recordings (A couple of blips along the way with Glitter and Toyah not withstanding) from the classic 'Demolition' album in 1980 to 'Believe' in 2004,but this album is just outstanding.
Sounding as fresh as they did when they released 'Take It All Away' in december 1978 this album exudes energy and confidence and the "Special Guests" add to the music as opposed to "Steal" it, if you get what i mean? although Iommi & Dio do their own version of I Spy.
First couple of tracks are in typical style,but 'I Spy' is the first stand out track its slow,pounding and moody with great vocals and catchy lyrics.The same song is reprised as track 13 with Dio on vocals and Iommi on guitar and i have to wonder why.
'Spend Spend Spend' is a well timed track with out current financial climate and also features guitar work from J.J French.
'Whole New World' almost raps its lyrics and features Neil Murray (Once known as king of the liggers) and Phil from Motorhead.
'Metropolis' is a great cover of Motorhead's song originally on the 'Overkill' album back in 1978, Eddie Clarke plays his guitar brilliantly for the girls.
'Zeitgeist' is another stand out "gets yer headbanging" track as is 'Dont Talk To Me' with Lemmy on vocals and bass and according to the press release a triangle !
Yep you gotta throw in a classic and they do with another version of 'Emergency' and you know what what i still love that song,though my fave of all time is still 'Dont Call It Love'.
We end with 'London' it has an old punk feel and a shout it out chorus of "London whoa oh u got everything", this also acts as a reminder that Girlschool are still in touch with their roots (Skin Flicks in 1977 anyone??) and that of course London rocks!
Go buy this album even if you are under 40 years of age,it rocks!
Rating : 9.5/10
Get This If You Like : Motorhead,Damned,Tank,Rock Goddess,Nemhain,Donnas.
Contact : www.myspace.com/girlschool1
www.girlschool.co.uk
www.myspace.com/kellyjohnsontributepage
STU
Labels: Black Sabbath Dio Girlschool Glam Rock Heavy Metal Motorhead NWOBHM Punk Twisted Sister

Mr Stu said…
No docked a point five for the pointless dio/iommi version of i spy,its out of place here,they should have contributed to the girlschool mix as opposed to putting a Dio track on someone elses album.
Stu
15 October 2008 at 12:46