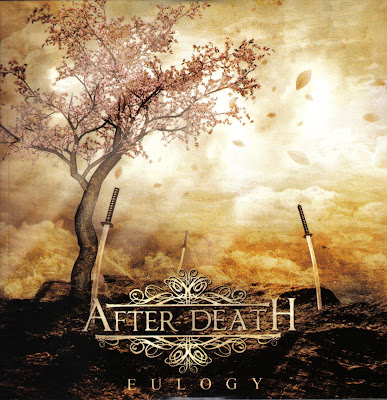 01.Rite Of Passage
02.Beyond Suffering
03.We Are The Now
04.Seeking Salvation
05.In Ruins
06.Spawned
Ken Do (Vocals)
Leon Villalba (Guitar/Keyboards)
Barry O'Connor (Drums/Vocals)
Marc Yacas (Guitar)
Timothy Kennelly (Bass)
Not the florida based black metal band but a london based metal group.
Formed by Marc, Barry and Leon in 2005, all of whom studied together at St Aloysius Secondary School and shared a great understanding of each others musicial interests.
In August 2009 After Death was joined by a fourth member Kendo who made a great addition to the band; bringing untold energy and intense screaming vocals and finally Tim joined on bass in september.
Awesome ambient fx and keyboard intro of 'Rite Of Passage'leads into a full on in your face onslaught, it actually borders on Black metal riffs and drums before blasting into metalcore/post hardcore metal.
The screaming vocals tear through you, but it is the powerhouse drumming and stunning backing vocals that sets this above the competition.
'We Are The Now' has a great anthemic feel to it, very catchy with the line "we're Running Out Of Patience" and the shout it out title, this has great commercial potential and should be released as a single or at least do a promo video for it, i think this song would be the one to get them noticed.
'In Ruins' is another stand out song, full of melody and with a defining riff throughout, sure its got screaming in it but again its the backing vocals that give it depth.
I had to smile at the last track, it just reminds me of Cradle Of Filth with its Dani like vocals, musically it has quite a bit in common as well, the song is about 2 minutes long as well.
Rating 7/10
For fans of : Killswitch Engage, As I Lay Dying, Slipknot, Johnny Truant
STU
Labels: After Death Heavy Metal