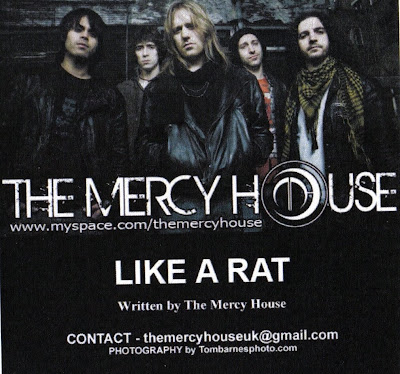 01.Like A Rat
Drew (Vocals)
Dany (Guitar)
Kiran (Guitar)
Nick (Drums)
Anthony (Bass) NOTE : Not On This Track
So Mercy House let loose another one track cd, question is can it live up to its fantastic predecessor "Inversions"???
Well its another great song, got a led zeppelin vibe to it, some really nice guitarwork throughout from acoustic to electric, its a good solid album track.As always its a perfect vocal delivery from Drew, his range and power simply blows away any peer you care to mention.
However this track has one draw back and that is the mix of the song does not sound right, its like the backing vocals bleed over the lead vocal too much and it sounds "odd", now that may be the reaction they are after, after all there is nothing wrong with throwing the listener off sometimes, so im sure they hate me now for saying that !
I think the song Break The chains (Listen to it on their myspace) would have been a better choice to release as a single, for that song is brilliant.
Hey now dont get me wrong,its a mix thing not a song thing.
Rating 7/10
For Fans Of : Roxville, Cavalar, Breed 77, Whitesnake, Audioslave
STU
Labels: Heavy Rock Mercy House