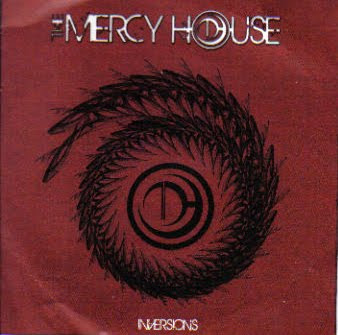 01.Inversions
02.You Know Me
03.Reborn
Drew (Vocals)
Dany (Guitar)
Dan (Guitar)
Antony (Bass)
Nick (Drums)
So it was march 27th of this year that Mercy House made their debut with Drew on vocals
at the rock attic in streatham, their next gig was at the Underworld in Camden
So right from the start it was a step up every time, they lost a band member and
replaced him then started recordings, did more gigs, got a few good support slots as
well, gigged constantley even out of London shows and released a couple of one track promo cd's to be given away at gigs.
So 9 months later Drew hands me a 3 track ep with all remixed songs and a much more
professional package as well, this cd will also be given away at gigs, the question for
me is, is this yet another step up?
Now 'Inversions' still remains my favourite song, in its demo form it was awesome, time
to hit play.........
Its polished, richer, the guitars sound a lot better and Drews voice, well ive always said its THE voice of rock and this just proves it.
The song is a moody rocker and remains a classic.
'You Know Me' has some great acoustic guitar throughout, it keeps the song moving along with an almost Zeppelin feel, but when it kicks in with the screaming vocals oh wow this becomes a monster of melody and power.
The final song 'Reborn' has a power metal feel, with a huge chorus that is guarenteed to get everybody singing along, great use of acoustic guitar again, all goes to underline their sound to perfection.
There is a lyric in 'You Know Me' that goes "I will not compromise" and that sums the band up, it is a great sound, superbly put together with a a lot of thought and a single vision to create the most exciting and original rock you will hear.
Without any shadow of a doubt Mercy House create stunning rock music and with a quality that will last for years to come, a step up i asked at the beginning, well no a huge leap up!!
Rating 10/10
For fans of : Soundgarden, Alice In Chains, Whitesnake, Cavalar, Led Zeppelin
STU
Labels: Classic Rock Mercy House Rock