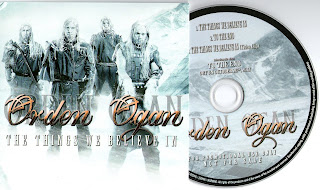 German melodic metal band formed in 1996 came to the attention of the masses in 2004 when they released their first EP 'Testominium AD'.

Sice then they have forged forward creating their own style and trying wherever possible to advoid many of the genre's given musical cliches.

That said the promo disc i have to review tends to fall into very obvious cliches of european power metal, yes the vocal performance is quite outstanding, but the music is high spped technical power metal as personified by awful bands like Dragonforce and like that band its is all "Very clever" and well produced but actually is cold and empty without any soul. 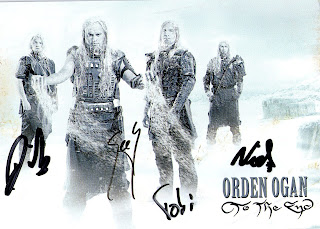 So track one 'The Things We Believe In' starts with folkish acoustic guitar then moves into typical drum and guitar riffs, again what stands out is the vocal delivery which is faultless while the backing vocals and chorus is pure 'Turisas'.

The video is your typical "Post Apocalyptic" theme the only difference being snow instead of fire, nothing to get excited about.

The second track 'To The End' has a touch of the Megadeths about it, which is probably why Dave Mustaine likes the band and is tweeting about them.

So all in all a bit dissapointing, basically boring and unoriginal music BUT superb vocals! Another German band, Mob Rules formed in 1994, drawing on diverse influences from traditional metal to progressive rock and named after a Black Sabbath album.

'Ice & Fire' apparently was inspired by the story of abducted Columbian politcian Ingrid Betancourt' and the music was clearly borrowed from Metallica's 'One'.
Another shining example of BORING and pointless music.

Whats worse is that the album version is 7 minutes long (Another nod to Metallica then???)

For Fans Of : COLDPLAY