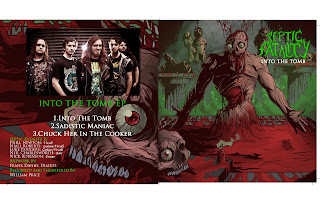 01.Into The Tomb
02.Sadistic Maniac
03.Chuck Her In The Cooker 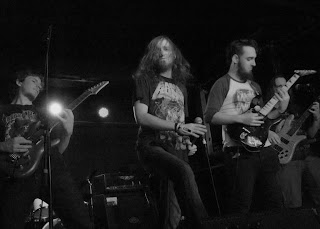 Septic Fatality are a 5 piece speed thrash band from Sheffield started as a project back in 2008 by guitarist Niall Roberts.
Drawing on thrash legends such as Testament, Overkill and Slayer as their reference point to create an intresting and unique mix of old-school thrash with a modern twist by  adding their own taste to the sound.

This first EP came out in October, the same month they supported the mighty 'Evile' in Sheffield.

Clearly not a band to iss the oppertunity to capitalise on the recent success they are already in Pre-Production for the new Septic Fatality EP has begun.

The band said "things are moving rather fast! We are aiming to release around 5-6 tracks on the next EP and intend to record it early to mid 2013. The songs will carry on from where we left off with “Into The Tomb” but pushing our sound even more, Opening doors and shutting some too". 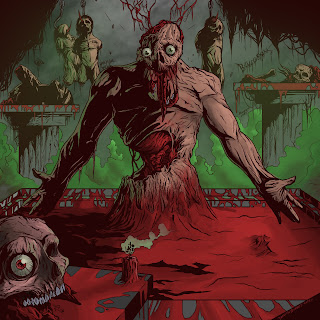 Kicking off with 'Into The Tomb' you get hit with a punchy riff and solid drums with a shouty vocal, this could easily be classic old school thrashers 'Virus'.

'Sadistic Maniac' is faster with that typical proto thrash sound, quite anthemic and well put together.Some nice guitar work throughout was kind of expecting a screaming solo half way through but it didnt emerge, they opted for the punch and it worked!

Now 'Chuck Her In The Cooker' might sound like a Cannibal Corpse song title, in fact even the artwork evokes the grindcore scene, but this one is a punk/thrash hybrid like Toxic Holocaust.
Some craking guitarwork in this one, solid bass and drums punctuating throughout and suitably aggresive vocals!

A great little EP, nice to hear a band getting to grips with classic thrash but not getting caught up in the complex riffery and 8 minute epics that took the soul out of the scene.
They have created a typically British sounding style, which whilst clearly a nod to the past is definatley showing a way forward, bring on the next EP!

Anonymous said…
This comment has been removed by a blog administrator.
28 November 2012 at 22:12