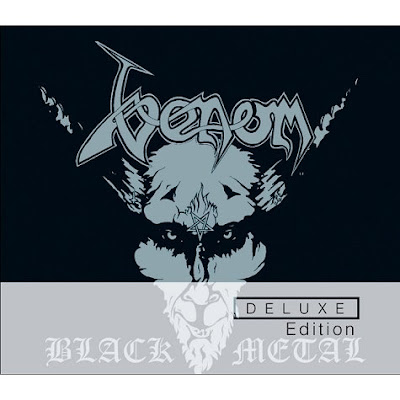 
Remastered and repackaged this is one of the most important albums ever made in the history of heavy metal.Originally released in November 1982 to a hail of abuse from the critics who dismissed it as badly played rubbish whilst they raved over def leppard!
Without knowing it the Newcastle trio's second album was to launch a genre of metal that would sweep the world, although it has to be said that "Black Metal" became something very different from this album, it was however the starting point.
Starting with the opening noise of a drill or something it goes into a motorhead like riff and off we go leading to the line that goes "lay down your soul to the gods rock and roll", come on you know it!
Its a non stop onslaught, a wall of power, the most metal album of its time.Okay 'Teachers Pet' is a bit childish and doesnt exactly fit the satanic styled lyrics that lead us to to the final song "At War With Satan".
Titled as an intro to the next album it is a stunning 2 minutes of sound efects and some great speech by Cronos.
Now this repackage has added some great stuff with the misleading 60 minute verson of 'Bursting Out' which is about 4 minutes, the friday rock show session, and the second and third singles and one studio outtake.
If this isnt enough for yer money you get a bonus dvd which has the full Hammersmith Odeon debut gig.An awesome performance and one which i witnessed myself, when those flame throwers went off you could smell the singed hair and someone was carried out!
Aside from that there are three promo videos, not the greatest ever made, but pretty damn cool i have to say and ones i never saw first time around.
All in all a superb value for money package!