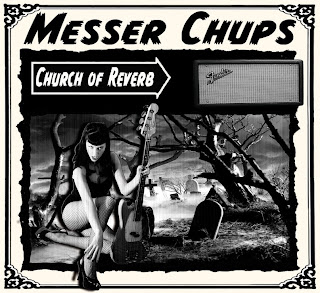 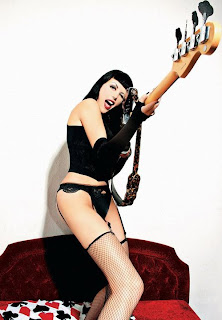 In 2003, the producer of Messer Chups and head of homelabel Solnze Records, Oleg Tarasov, invited the world famous theremin player, Lydia Kavina, to join them. Together they have released several albums and reworked their previous releases. In 2005, Messer Chups became a duo consisting of Gitarkin and ZombieGirl on bass. In 2007, they became a trio, with drummer Denis "Kashey" Kuptzov from the famous band, Leningrad.
In 2008, they changed their drummer to Alexander Belkok, and Alexander Skvortzov became their vocalist.

Messer Chups' music often features a foundation of surf drums on which they build collages of samples from odd sources, like jazz, east European animation soundtracks, and American B-pictures. On top of that they lay guitar solos and theremin.

Sounding like a mixture of the "Chantays" and Dick Dale the majority of these tracks are classic surf/rockabilly instrumentals.

'Rockin Zombie' has a great vocal sounding like vampira, also some great sax playing in the mix.

'Dracula Hates Photoshoots' is a great fun song and to be honest the whole album is fun!