BLACK CANDY STORE - BACK TO THE WALL (CD Review) 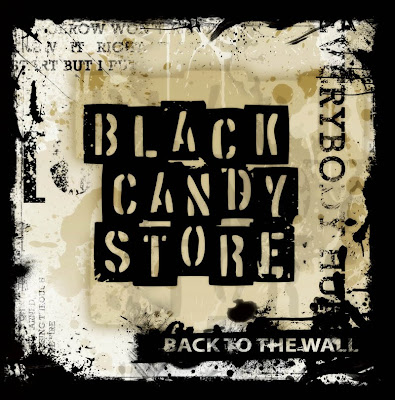 01.Back To The Wall
02.Someday
03.Swine Seed
04.Recall
05.Wounded
06.Hollow
07.Humility
08.Bittersweet Euphoria
09.The Pledge
10.Upward Spiral
Arno (Vocals)
Julien (Guitar/Keyboards)
Flo (Drums)
Marco (Bass)
Formed in October 2008 in Southern France, the rock quartet set about creating the most original and authentic post grunge "Seattle Sound" and added a huge slab of classic 70's rock into the mix.
In August 2009 they went into the studio and self produced 10 tracks that were mastered by Dave Collins (Linkin Park, Soundgarden).
Title track 'Back To The Wall' has all the qualities of a Velvet Revolver outtake, thats not to say its a bad song, but it should have had a little more attitude.
It doesnt improve that much with 'Someday' a huge step backwards that plants the band firmly in bland Nickleback territory.
'Swine Seed' starts with a movie sample and lyrically deals with world hunger and makes the clever implication that big buisness will take care of it."Good health wont be so cheap, your lives are good indeed, i introduce our new shit, please applaud our swine seed".Direct reference to crops that do not reproduce themselves.Its a mid tempo rock ballad with some nice acoustic guitar throughout.
Those chris Cornell influences come out big time for 'Recall' and does it some justice.
'Wounded' has an awesome southern rock feel, fantastic acoustic and subtle slide guitar.The vocals are simply stunning and the production top rate, without a doubt the best song on the whole album and one which should be pushed onto the radio and even be released as a single, it has "hit" written all over it.
So a weird intro, unsettling timing changes and pure zeppelin worship are just three elements that make 'Hollow' my personal favourite.
That zepp feel continues with the slighly heavier 'Humility' but the backing vocals keep it radio friendly.
This may be one of those lighters in the air songs, but 'Bittersweet Euphoria' just doesnt quite cut it above an easy listening tag.
Fortunatley 'The Pledge' woke me up with a punchy drum kick and a good rhythmic powerchord structure.The second half of the song shows some classy musicianship with live active bass and a solo worthy of Jimmy Page himself.
Finally 'Upward Spiral' with its chord heavy headbanging moments ends an impressive but flawed debut that shows the band have the ability to go on and create something that will knock you out.