THE ORDER OF APOLLYON - THE FLESH (CD Review) 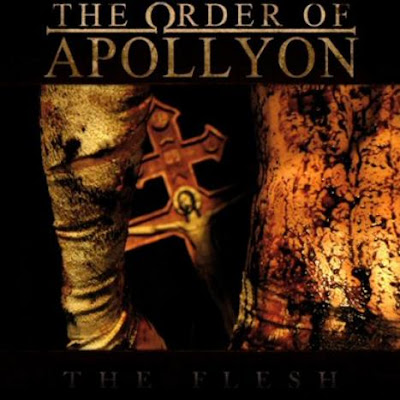 01.God Speaks
02.Ich Bin Das Licht
03.Word
04.Never
05.Fifth
06.White Dust
07.Four Beasts
08.Flesh Of Yhvh
09.Ex-Voto
10.L'Orgueuil
James McIlroy (Guitar)
Dan Wilding (Drums)
BST (Guitar/Vocals)
Peter Benjamin (Bass)
Formed in summer 2008 by former Aborted members Daniel Wilding and BST, the band began work on the first offering following the induction of guitarist James McIlroy (Cradle Of Filth/Chaosanct) and bassist Peter Benjamin (Akercocke).
The opus, entitled “The Flesh”, concentrates on the passage from the spiritual to the material,
and unlike the clinical sounding productions that intoxicate the metal industry.
The Order’s first release aspires to praise the extreme metal scene of the late 80’s/early 90’s.
The cult of Apollyon is set on dessiminating the message of our God the Supreme Being. It will drive the masses to accept the indubitable domination of the Holy Spirit and to repent their sins before the impending Judgement.
The disloyal scum shall writhe in Eternal Suffering, while a chosen elite shall bathe in glory and rapture. Unconditional devotion is the key.The tag line is more a statement of intent than a mere slogan:
"For his Name. For his Glory. For his Victory. Judgement is upon us. Join The Order."
A nice intro leads us into an aural onslaught of powerhouse drumming, well executed riffs and screaming vocals that have much more in common with Black metal than the more obvious extreme metal that they wanted to emulate.
In fact the opening song 'Ich Bin Das Licht' would not be out of place on Dimmu Borgir's 'In Sorti Diabol' album.
'Word' also has a near symphonic quality to it, however the speed and power keep this firmly in the "extreme" but clearly outclassing the majority of genre exponents by a clear mile.
The powerchord driven and brooding 'Never' blends rhythm with short bursts of high velocity metal to perfection, superb lyrics and the overall production and structure make this for me the best song on the album.
Track 5 with its inspired title 'Fifth' creates that wall of energy that requires a seatbelt on the sofa to appreciate, especially when played at 100% volume.
Both 'White Dust' and 'Four Beasts' stick to traditional form with blast beats punctuating the mayhem, with added guitar solos to die for.
As promised the song 'Flesh Of Yhvh' delivers on all levels, near demonic vocals backed with punchy chord work truly harken back to the glory' days whilst retaining the modern edge and influence.
The horror movie score quality to 'Ex-Voto' creates a sense of impending doom and the haunted vocal effects makes for an ambience that will require a change of underwear for some.
Finally 'L'Orgueuil' deals with the subject of pride, musically its a real headbangers delight with a solid heavy rhythm and enough melodic breakdowns to recover.
STU
Rating 9/10
For fans of: Anaal Nathrakh, Axis Of Perdition, Akercocke, Dimmu Borgir
Labels: Akercocke Black metal Chaosanct Extreme Metal Order Of Apollyon

Anonymous said…
awesome blog, do you have twitter or facebook? i will bookmark this page thanks. lina holzbauer
3 January 2011 at 15:44