FROM GREAT HEIGHT - SPECTRES AT THE FEAST (Cd Review) 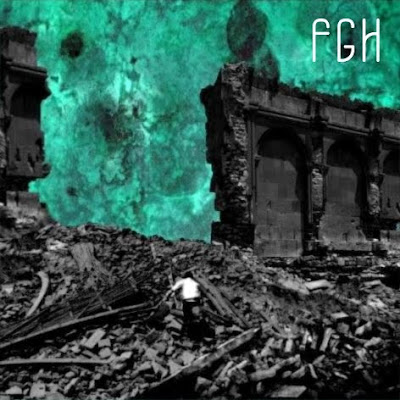 01.Spectres At The Feast
02.It Died A Quiet Death
03.Invited In By
Adam Ever (Vocals/Keyboards)
Michael Alp (Guitar)
Paul Buckingham (Bass)
Tim Storey (Drums)
These are the first recordings since Tim joined late last year and show a clear forward
progression for the Enfield based rock group who are now deservedley gaining major press
attention.
Many great bands start life with a lable that does not really represent their body of
work, think of bands like U2, Simple Minds, The Jam who were essentially classed as
Punk/New Wave, this is true of FGH who gained a "Progressive" tag, yet drew comparisons
to a variety of artists as diverse as Marillion, David Bowie and Roxy Music.
What the band have done even at this relativly early stage in their, what will become a long, career is create a unique brand of commercially viable rock music that trancends genres from Extreme metal to stadium rock and intelligent pop music.
The dual attack of haunting vocal and guitar open up this first track 'Spectres at the
feast' before the song literallly explodes into a crescendo of keyboards and drums mixed
with absolute perfection.A truly epic song that blends agression with melody with defining keyboards making for an instant and very catchy hit.
The live favourite 'It Died A Quiet Death' is next, a mid tempo rock number with a great
guitar riff punctuating the quality throughout.Its anthemic qualitys are simply awaiting the massive audience cheering and singing along that a main stage support at Glastonbury has been crying out for.
The slow ballad quality to one of the earliest songs ever written by Michael Alp,
'Invited In By' showcases Adam's awesome and mature vocal delivery, but also the early
Progressive influences of Michael.The various timing changes, use of synth and the superb phased guitaring create a song that has truly epic qualities and with a drum fade out that just leaves you wanting more.
All in all a single of such professional standards i can but hang my head with pure
disbelief that this band are not signed and arranging a major European tour.
But good things comes to those who wait and in years to come From Great Height will be a household name.
STU
Rating 10/10
For fans of : Marillion, U2, King Crimson, Peter Gabriel, Simple Minds
Labels: Classic Rock From Great Height Progressive Rock Rock