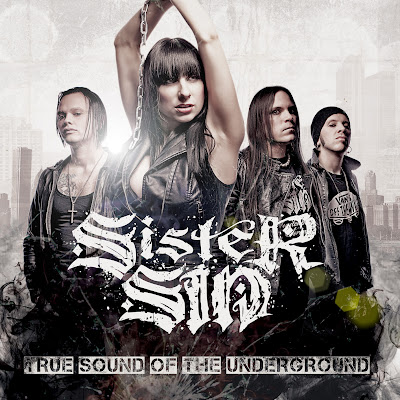 01.Sound Of The Underground
02.Outrage
03.Better Than Then
04.24/7
05.Heading For Hell
06.I Stand Alone
07.Built To Last
08.The Devil I Know
09.Time's Aren't A-Changing
10.Nailbiter
11.Beat 'Em Down
Liv (Vocals)
Jimmy (Guitar)
Dave (Drums)
Benton (Bass)
Rejecting the "Gothenburg Sound" that Swedish legends 'At The Gates' single handedly started, Sister Sin looked back to the early 80's euro metal scene for their inspiration, dispite coming from the same town.
So seven years later after numerous high profile tours with the likes of Arch Enemy and Motorhead, several self released recordings and one official release they arrive at album number two and hope to break out into metals mainstream market once again having built up a following in America last year when their song 'On Parole' appeared on the Rock Band playstation game.
If you love metal then you will love this album, essentially it ticks the boxes with fast paced drums, good guitar work and straight forward vocal delivery.
There are a few tracks to pick out like the anthemic almost Motley Crue sounding 'Outrage' which is due to be released as a single soon.
'Time's Aren't A-Changing' has that "fist in the air" quality that will no doubt make this a firm live favourite.
The final song 'Beat 'Em Down' is a heavy as fuck fast paced tribute to Swedish boxing legend Ingemar Johansson complete with some clever use of boxing ring/crowd sound effects.
STU
Rating 8/10
For fans of: Warlock, Acid, Girlschool, WASP, Motorhead, Scorpions
Labels: Heavy Metal Sister Sin