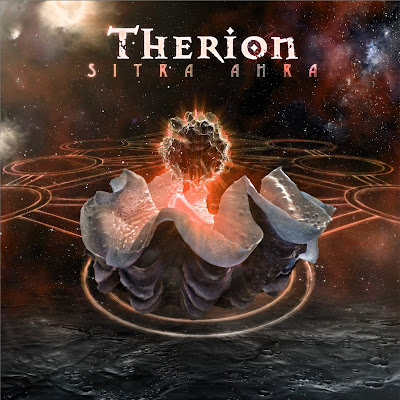 Legendary Swedish heavy metal band founded by Christofer Johnsson in 1987.Despite the religious connotations their name is actually a homage to the Celtic Frost album To Mega Therion.

Beginning as a death metal band, they later turned to combining orchestral elements with their metal music, employing heavy use of choirs and classical musicians, not only as additions to but also as integral parts of the composition.

There are a number of slightly exagerrated claims such as "Therion is the first metal band with fully live orchestra", something that Deep Purple first did back in 1969 and "It is also the band which originated, popularised and influenced the symphonic metal genre", i would suggest the Italian band Devil Doll have more of a right in the "originated" and that it was Nightwish who "Popularised" the genre.

However Therion are almost certainly the best exponents of the genre that at times is more operatic than mere symphonic metal.

Musically taking its themes from different mythologies and is based on concepts ranging from occultism, magic and ancient traditions and writings. The majority of their lyrics were written by Thomas Karlsson, head and founder of the magical order Dragon Rouge, of which Johnsson is a member.
The band has seen many changes in line-up and style throughout its history, perhaps the most shocking was the departure of Karlsson in 2008, however in November 2009 a new line up was put together along with the announcemnet of the recording of this album.

Generic symphonic pomp is a perfect way to start this album and 'Sitra Ahra' ticks every box, with high female vocal and dark male vocal, full chorus, driving drums and powerchord structures and a blazing solo.


'Kings Of Edom' has an operatic start but quickly switches to folk/ballad influences.
Half way through the epic vocal chorus brings to mind Turisas, whilst dare i say that towards the end it has all the qualities of a Moody Blues song before heading into speed metal territory.


A serious nod towards doom metal heralds 'Unguentum Sabbati' a straightforward blast with awesome vocals and lurking in there some keyboard riffs from Phantom Of The Opera.


'Land Of Canaan' oh fuck!!!
Seriously how do i even begin to review this song???
Its a 10 minute mini opera that throws everything at you, okay so it has that spookycore start a la KoRn, then we enter classic euro prog metal, then harmonica and acoustic guitars that would make Ennio Morricone proud, which then morphs into battle metal territory with some great flute playing thrown in.
Then here comes that epic male choir, then damn we get some accordian and soprano female vocal to slow things down a bit.
Yet another tempo change with harpsicord leading to traditional eastern european folk with a vocal that could be Marilyn Manson duetting with Topol from fiddler on the roof!!!
A melancholy breakdown then blends into a mid tempo drum rhythm with violins and cello's and another male chorus, then a happy upbeat almost pop bit with some humming and a Kate Bush (ish) vocal blended with more opera.
This is just the most stunning song i have heard in a very long time!

Just how many vocal styles can they keep coming up with??? 'Hellequin' seems to be able to put in black metal vocals and Male tenor that could be Christopher Lee.
Some great 60's style organ playing add's to the ecletic mix to create yet another outstanding piece of music.


The anthemic 'Cu Chulain' with its echo of a traditional welsh male choir on the chorus mixing well with its hard rock verses and overall structure, definatley a touch of Thin Lizzy lurking in the background.
Funnily enough its not unlike a heavy metal take on pet shop boys go west!


Gothic and anthemic and heavy as hell, 'Kali Yoga III' and taking on the Krishna mythology way better than George Harrison ever did!
The song continues from parts one and two from their Sirius B album from 2003.


That wonderfull tenor vocal returns for 'The Shells Are Open' its an almost bouncy ska like backing, a typically operatic song.


Whoa!!! suddenly satyricon make an appearence (well not actually them) but could be with this full on black metal assault with the aptly titled 'Din'.
Furious double peddling and blast beats with full choral vocals create a stunning headbanger.


'After The Inquisition/Children Of The Stone' brings us to a gentle and calm finale.
Beautiful acoustic guitars lead into a pink Floyd/Moody Blues chill out.
The choir sounds almost childlike bringing to mind that song from the Lost Boys movie.

In terms of musicianship, structure, production and emotion this is quite possibly the best album you will hear this year.

Anonymous said…
Dude, Deep Purple was/is not a METAL band, they're a (hard) rock band. Therion definatly was the first band to define what later became the symphonic wawe of metal bands of the 90's.
18 August 2010 at 21:54

Nate Howlett said…
Nice review!! But Thomas Karlsson did not leave the band!! It was Petter Karlsson, the drummer :) He now plays in avantgarde band Diablo Swing Orchestra
19 August 2010 at 06:35

Anonymous said…
I just hope this sounds more like lemuria/sirius b than gothic kabbalah, like one of the mails from Kliffoth once stated

I don't have any real reason to hate gothic kabbalah but it's my least favourite album of the symphonic era. I guess I just had too high expectations for it after lemuria/sirius b
20 August 2010 at 08:32

Anonymous said…
Gothic Kabbalah was my least favored album as well - until i herd it the right time. That's the magic about Christofer's arrangements: I may last long until you totaly feel it but then it's like a second skin that makes sense as a whole, and as single tracks. They all are great, and different.
21 August 2010 at 00:23

Anonymous said…
In defense of George Harrison; perhaps that Therion does carry out the Hindoe myths better, but let us not forget that it was George Harrison who introduced Indian music to the popular music from the Western world.

ClovenHoof from Sweden said…
So much looking forward to this album. Gothic Kabbalah was the greatest so far. All the other albums were just rehersals compared to G.K., I think. Just have to bear it another 4-5 weeks.. goddamn it..
23 August 2010 at 13:13

Mr Stu said…
Okay Deep Purple was/is not metal quite right, but neith are Therion any more, so my comment stands and i noticed you didnt mention Devil Doll.

Thanks for the corrections, but blame the record company for mistakes on their info sheet!!!

Anonymous said…
there's an mp3 for the first track available for download in the nuclearblast website, because of a video contest :)

Mr Stu said…
to ANONYMOUS,
Glad you liked devil doll and i got the cd from the record company as i am a registered journalist.
I write for numerous other websites as well as my own :)
27 August 2010 at 23:20

Anonymous said…
"Okay Deep Purple was/is not metal quite right, but neith are Therion any more, so my comment stand"

Sorry, but it really doesnt. Therion is 90% metal even if do other stuff as well. Deep Purple is 0% metal.
Also at the time Purple did that orchestral album, they were not even a hard rock band, but a regular rock band. If that album counts, then there are several other earlier albums that counts, Moody Blues"Days of Future Passed", Floyds "Atom Heart Mother" etc.

A band you forgot to mention is Celtic Frost, they were the first metal band to go in this direction.
5 September 2010 at 18:19

GonzO said…
For the first three songs, I was happy. All-good-to-great. Parts of Unguentum Sabbati took my breath away.

About 2:12 into Land of Canaan, though, this entire Symphony (I refuse to call it an "Album" anymore) goes COMPLETELY off the rails.

This is the musical equivalent of finishing the 256th maze in Pac-Man, or getting over a million points in Asteroids.

This is certainly the best Therion album. This definitely contains the best single song Therion has ever made. This is certainly in the "top five" favorite pieces of music I have ever heard, and may actually be the best.

andreas t said…
I'm glad that so many seems to like this album. But I'm dissapointed myself, the album has many awesome riffs and melodies (especially in Kings of Edom) that is totaly outstanding, but no songs that are awesome right througt, and I'm most dissapointet with the vocals it all was better before :( I miss the old Theli and Vovin times :(
The songs from that time, Cults of shadows, clavicula nox, Nightside Of Eden was perfekt right trought.
21 September 2010 at 19:23