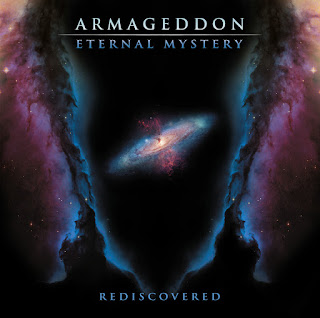 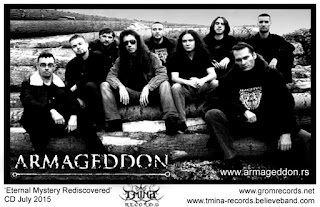 ARMAGEDDON is a band from Novi Sad and are among the veterans of the local Heavy Metal scene in Serbia. The band was formed in 1987, and it is the creation of the solo artist Djordje Letich, who is also active in other bands on the scene, with the band Tornado being the most significant among them. ARMAGEDDON has existed for many years as a one-man band, while Djordje Letich, in the manner of true virtuoso, was combining elements of Heavy Metal sound with other similar and not so similar musical streams, examining the possibilities of complex styles and incorporating them together.
In its long history, until recently, ARMAGEDDON never set foot on the concert stage! Their performance at Exit 2012 was the exclusive live appearance of the band. Later, in December2012, the band held its "Doomsday Concert" which live recordings are the backbone for this new, currently issued album.

"Eternal Mystery - Rediscovered" is truly a "Heavy Metal Symphony" featuring Opera singers from the Serbian National Theatre of Novi Sad and a full string quartet that guide the listener through a musical journey, about the Secret of Life and Death. A highlight of the album is the live bonus track "Mordor" with which displays the full power of this now 11 musician outfit called ARMAGEDDON.
ARMAGEDDON's "Eternal Mystery" was originally recorded 25 years ago and this upgraded album entitled "Eternal Mystery - Rediscovered" is a special anniversary edition. ARMAGEDDON are considered to be one of the first Sympho Power/Prog Metal groups in the region of Europe. The original album was recorded in very poor conditions, on only 8 channels, by analog equipment. This new modern "Rediscovered" version of the album was rerecorded and remixed with additional recordings on 128 channels! 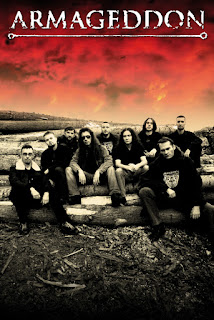 After the spoken introduction we move into the melodic almost iron maiden-esque style of power metal with 'No Advice' and just a single male vocal.

'Curse Of Black swan' is just another spoken piece, but with added f/x, this goes into 'Black Swan Rider' which turns out to be a rather good 70's sounding pomp rock song, a sort of proto power metal.

If the last one was 70's then this one seems to be late 60's, 'Magic Star' has the right vibe for classic hard rock, good vocal backing and some great guitarwork are only slightly spolied by a pretty poor drum sound.

'Sarabanda' is a full on classical symphonic piece and then comes 'Heavy Metal Symphony' a totally stunning 27 minutes of pure rock opera.
From the spoken intro into its speed metal riffs it just soars through the speakers, then come the numerous timing changes, seemingly throwing in every style of rock and metal it can, even some dark and doomy parts. Later we get some folk and pure classical as well.Fantastic!

After the edits and other extra tracks we finally get 'Mordor' another stunning and all too short symphonic rock masterpiece.