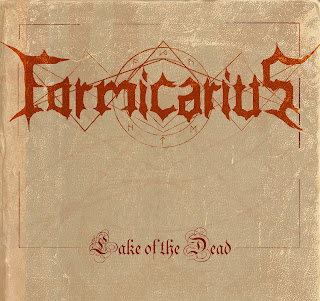 First conceived in the Winter of 2014, FORMICARIUS craft elaborate tempests of black metal that hit the listener like a finely sharpened sword to the skull: ornate yet destructive.
Elements of death and symphonic metal are called upon to reinforcethe gargantuan sound that can be heard on single Lake of the Dead.
Unsurprisingly, Formicarius are not a collection of upstart amateurs,instead featuring members of De Profundis, Premature Birth, Phyrexia and Maxdmyz: no strangers
to UK extreme metal.

Epic symphonic intro to 'Lake Of The Dead' launches into some furious drumming and complex riffs. This is perfectly under-scored by the keyboards, which dont intrude too much into the mix.
A typical black metal gruff vocal style, but one that you can make out the words, cuts through the music and keeps your attention.

'Under Darkness' takes you on a melodic journey of keyboards and guitars, and here i am nodding my head along to this nice sounding music then all of sudden it explodes into a full on black metal attack.
Some nice little timing changes make this 3 minute song feel longer and more epic, very clever, oh and a nice little breakdown with a mini bass solo as well!

Finally (already?) 'Cosmic Keys' another clever and well structured song, the keyboards stay slow and melodic allowing the rest of the band to draw on their various extreme and black metal backgrounds to create a monster of a song, a good reminder than once upon a nightmare british black metal used to be something worth listening too and if the album lives up to this little EP, then dear reader there is hope for the future!