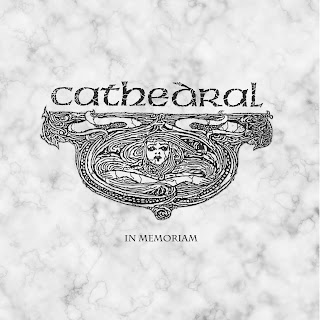 Live Holland/Belgium 1991
05.Intro/Comiserating the Celebration
06.Ebony Tears
07.Neophytes For Serpent Eve
08.All Your Sins
09.Mourning of a New Day 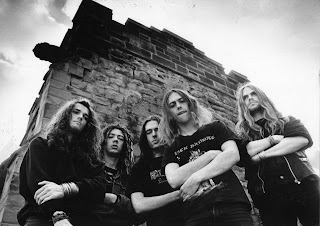 As with a choice few truly great bands, the first self-financed cassette recording by Cathedral - made available in October 1990 - was a pioneering underground masterpiece in its own right; the sound of a young band exploring its newfound chemistry, finding confident variations on a flawless list of influences and cultivating a sound and style that would prove hugely inspirational throughout the 1990s and beyond, being a major influence on everyone from Electric Wizard through to Reverend Bizarre.

Where most demos are little more than a dry run for the first album, 'In Memoriam' still has its own distinct and important identity in the Cathedral canon. The debut LP that followed, 'Forest Of Equilibrium', has a sombre, devout, melodic and mystical grandeur all of its own - but 'In Memoriam' has a far murkier, earthier, more deathly intent. Creepy, cryptic and bowel-looseningly heavy, it represents the first time that the
doom metal stylings of Trouble, Saint Vitus, Pentagram and Witchfinder General had been
rendered in a new, more extreme metallic form.

I will assume that i dont need to go into a history of this amazing band so i will cut to the review.
Seems kind of strange reviewing a "Demo" from 25 years ago, afterall it did its job and launched the band into the big time and into the hearts and record collections of thousands of music lovers all over the world.

Have to say massive respect to rise above for this stunning re-issue, the original demo along with previously unreleased live tracks and a dvd as well, add to this a very informative booklet with some great pictures and old gig ad's and demo reviews.

Right from the start it's clear that 'Mourning Of A New Day' was a very different beast to all that had called itself "Dom" before, this was slower, darker and with a vocal style so gruff, that i doubt few had heard outside of some of the new upcoming underground black metal bands from Norway.
This style was so far removed from the Napalm Death and Acid Reign roots of the band it must have shocked many a metal fan.

The Pentagram cover of 'All Your Sins' is done with much more edge and gloom than the original, proving that you can make a cover version your own.

'Ebony Tears' is an eight minute workout of slow pounding pain and not a Sabbath riff anywhere to be heard, this is all original and very well structured.

Finally 'March', with its marching beat played out on the snare and the chugging riffs you may think that this is somehow going to be a more straight forward kind of song, but it stays at the same pace throughout, never attempting to be anything other than what it is, a new breed of Doom metal.

What comes across with the live tracks is the sheer strength of the band and its power as a live unit, it's heavier and has a raw almost natural flowing feel.
Now most bands perform theie song live pretty much to the same standard and length of the studio versions, but Cathedral allow their songs to evolve and become a new live creature, the version of 'Ebony Tears' is over three minutes longer than the studio version and still somehow manages to leave you wanting more.