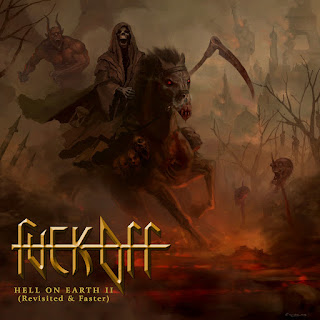 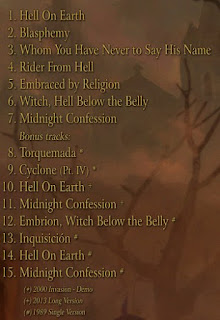 Formed in 1986 from Barcelona, FUCK OFF were Thrash Metal pioneers in Spain the 80’s first releasing a 7” EP in 1987 followed by two albums “Another Sacrifice” (1988) and “Hell on Earth” (1990).
After this, the band split up, reformed in 2010 guitarist Pep Casas with a completely new line-up and backed by also former vocalist Joe in some shows.

The band began writing new material, in 2012 the “A Different Sacrifice 1987-1988” CD came out and they recorded their long awaited 3rd album “Smile As You Kill” in the purest tradition of 80’s Speed/Thrash Metal with the mastering skills of Swedish mastermind Dan Swanö and cover art by greek artist Gerasimos Kolokas. This album was released in September 2013.

This latest cd contains new songs recorded in 2014 and gathers together single tracks and demos from their 1990 album. 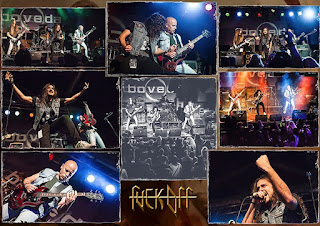 Have to wonder how this band ever got anywhere, i mean "I'm going to a gig tonight", really? , "Yes Fuck Off!", "Well fuck you then", well you get the idea!
Anyway to the music and the first 7 songs which are the "New" ones.

Cannot fault the quality of the music, classic speed metal style, fast, well produced and endless riffing, however the vocals are completly out, dont match the music at all, maybe he's not comfortable singing in English, maybe he cant sing, im not sure which.

Track 8 'Torquemada' is a demo from 2000, the music is just as good, but the vocals are also very good, matches the music and sung in Spanish, this is followed by an instrumental called 'Cyclone Pt IV' and is a speed metal take on Iron Maiden riffs, another good track.

Next up is the 2013 version of 'Hell On Earth' hope the vocals are better on this one, lets hit play...nope just as bad.

The rest of the tracks are from singles released in 1989; 'Embrion, witch below the belly'is a weird and wonderfull piece great vocals and some vocals with strange effects on as well, a lot of timing changes on this one, thrash and speed flow at different paces.
The other tracks are pretty good as well, even yet another version of 'Hell On Earth' which doesnt sound as bad as the other 2!