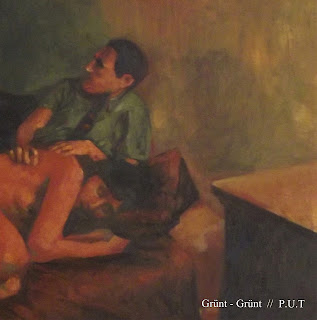 Grunt-Grunt is an epileptic Unholy Grind'n'Roll band from Angoulême, france formed in 2002. They dont seem to like song titles, have a facebook page and no bio was supplied by record company. So who knows what else the band have done, are etc? 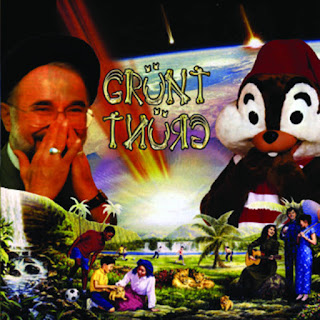 3 brothers, living between Paris/Brussels, started making music in 1998.
A a mix of machines Vs guitars, noise, sludge-metal, industrial and punk to create music madness, emotion, heaviness and anger.
Personal and without concessions, their 5 albums, 8 maxis, 3 live, 7" and various sound experiments, does not disavow their influences (of Godflesh, Killing joke, Sonic Youth while passing by Scorn or Unsane) the band intrigues at the most point.
It's on stage which the band reveal is power, making the same noise as 4-5 piece band, with intense, raw, dirty and disturbing sounds. 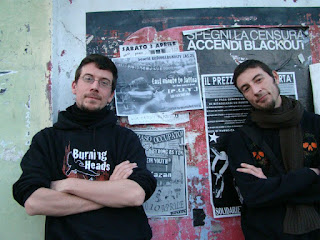 First up then is Grunt Grunt, and all they seem to do is grunt and make piggy squeals over some pretty standard fuzzed out short bursts of grindcore.
Only the last track seems to offer more with a slow almost melvins like sludge/crust hybrid.

P.U.T are better, first track 'With The Evil' is more of an industrial/goth song, slow with a simple guitar riff running throughout. The same sounds continue with 'Fear'.

Keeping with the post punk/industrial theme is 'Industral Vs Forest', weird jagged rhythms are punched out with echoes of Bauhaus at their most experimental.

The last track 'Under Most Darkest Sea' has more in the structure, drum patterns are prominent and it has a more dance orientated goth feel to it.

Have to say this is a strange pairing of bands.